Here’s a nice 30 track (2hr 45mins) DJ mix of 2000’s House classics. Expect Soulful, Funky grooves with plenty of vocals! Perfect music for sunny weather (or just to cheer you up at any time).

For my first mix of 2021 I decided to bring you almost 2 hours of Progressive House/Techno to soundtrack the frosty wilderness that is the month of January!

Last week was a time of many frustrations for me, some of my own making, some most definitely not. With the idea of streamlining my website into one single url and starting to create a more uniform web presence in anticipation of new musical releases I have been working on I accidentally deleted my website including all my old posts!
What you see here is all I could salvage, it looks the same but with less content. Of course this has now totally screwed with my Google rankings which is a massive pain but I feel I shouldn’t dwell on it for too long and focus on the future. I saw my future as including new original releases, some DJ mixes, and some reviews and promotion of other artists music. 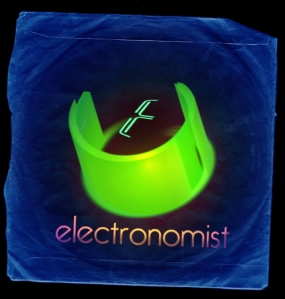 When Googling my own name I came to notice a result high up (presumably as it is a Facebook page and was fairly active) with the name “DJ electronomist”. I instantly knew that it wasn’t me as I never use the prefix “DJ”; mainly as I do not limit myself just to the art of mixing. I checked this page out and was bowled over by the sheer quantity of images of David Guetta and total lack of musical content. This pissed me off for a few reasons as I am not really a fan of that artist, the page admin was using my name, and couldn’t even be bothered to use images of himself or post any music (Original or stolen)!

My main annoyance was that I originally chose the name “Electronomist” for the very good reason of there being no Google results for that name at all, a good basis for building up an identity/brand/whatever. This was back in early 2008, I had a basic ugly website, some amateur music, but decent mixes (if I do say so myself). A while after that I noticed someone had been using my name in another part of the world yet spelling it slightly different (with a “k” instead of a “c”). This wasn’t so bad as we were in different parts of the world, had different music and different spellings. 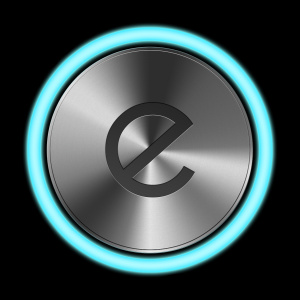 Fast forward to 2014 (although the page in question was set up at the end of 2013) and this imposter page on Facebook claims to be a combination of the two of us. He has been using the other guys radio show to gain “popularity” alongside pictures if his idol Guetta and using my name. And this person’s main mission? To get many likes on Facebook, as can be seen in our correspondence below.
Now to me that is sad as if you measure your successes in life through social media “likes” then there is not much going for you; especially when you are using other people’s works images and names to reach those heady heights of success!

Just today I have noticed this person uploading music to his Soundcloud account, (so called) remixes (more like re-edits at the most), mashups (which I suspect are possibly stolen from the other similar named artist/DJ), and music- all using my name. This is more shameful as it is music that I do not wish my name to be associated with!

I would trademark my name but do not earn enough money through music to make it worthwhile, so I suppose that leaves me to suck it up and ignore the issue. As you can see below I have tried to make this person see the error of their ways but to no avail, he is oblivious to how sad he looks and totally unapologetic. If I had made the same error of judgement I would have humbly and apologetically corrected my mistakes and renamed myself, but it appears that not everyone in this world can be as nice as that. 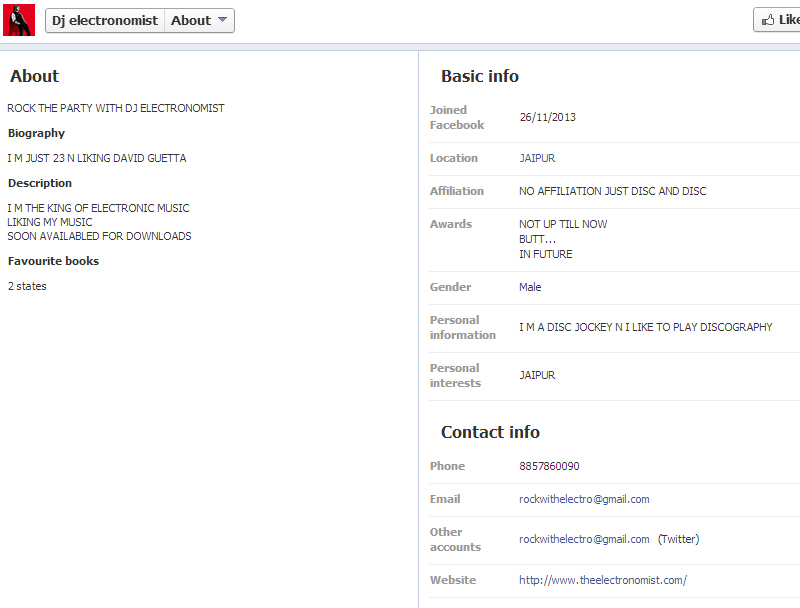 (Oh look he used my old URL and a picture of David Guetta… how professional!). 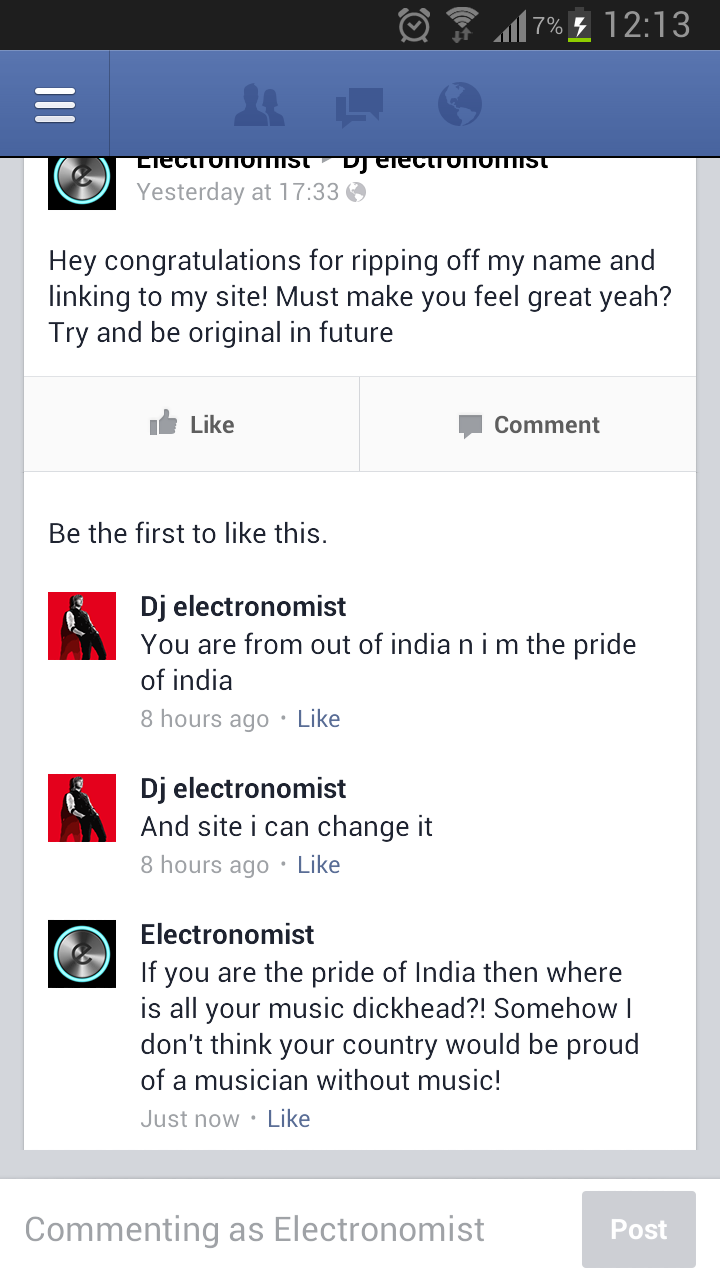 Naturally I get a little bit pissed off! 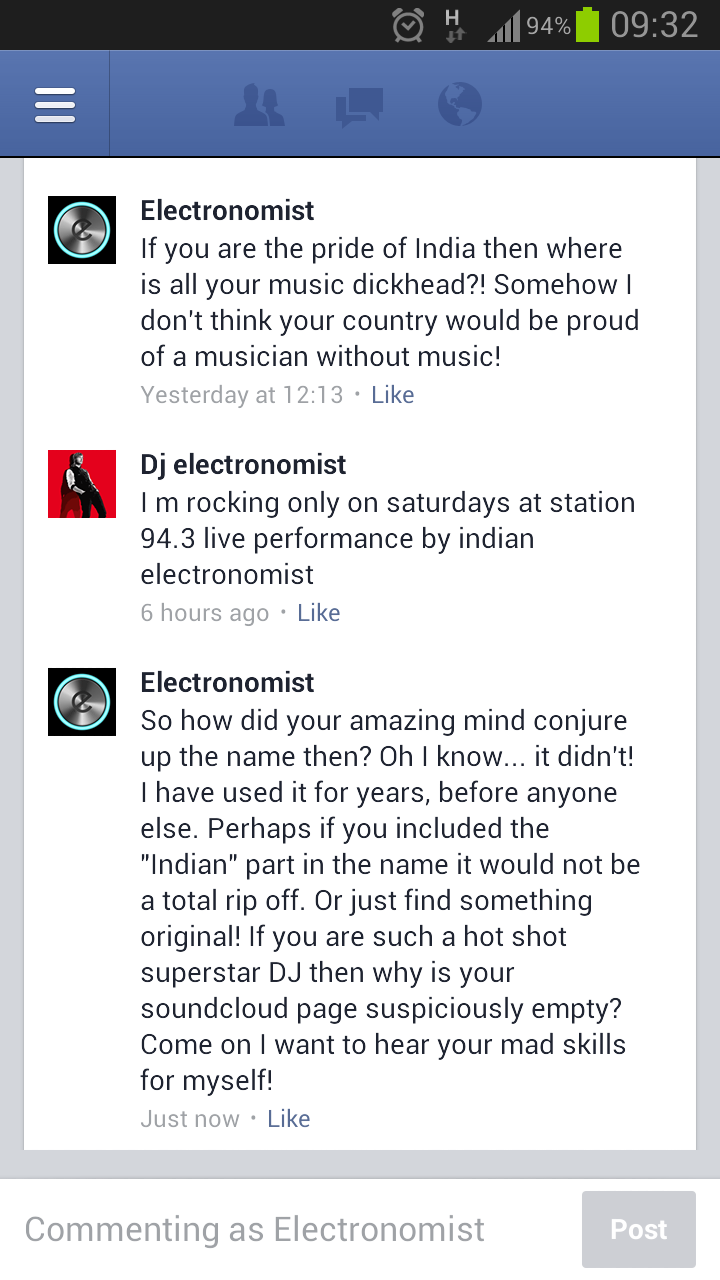 This is where it starts to become clear that he is ripping off a different “Elektronomist” (who I believe has the show) and the original “Electronomist” (who is me of course!). 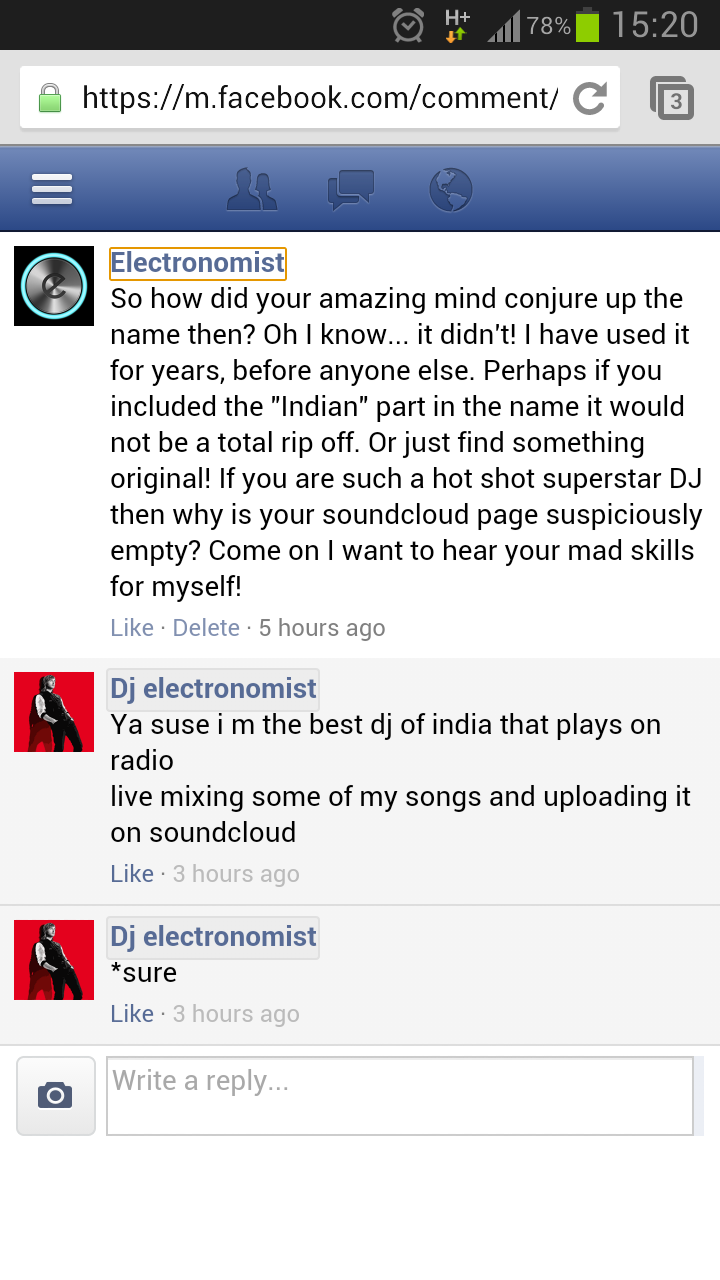 “Best DJ of India” and at that time his Soundcloud page was empty of any musical content (it now has some tunes which I do not wish to be associated with). 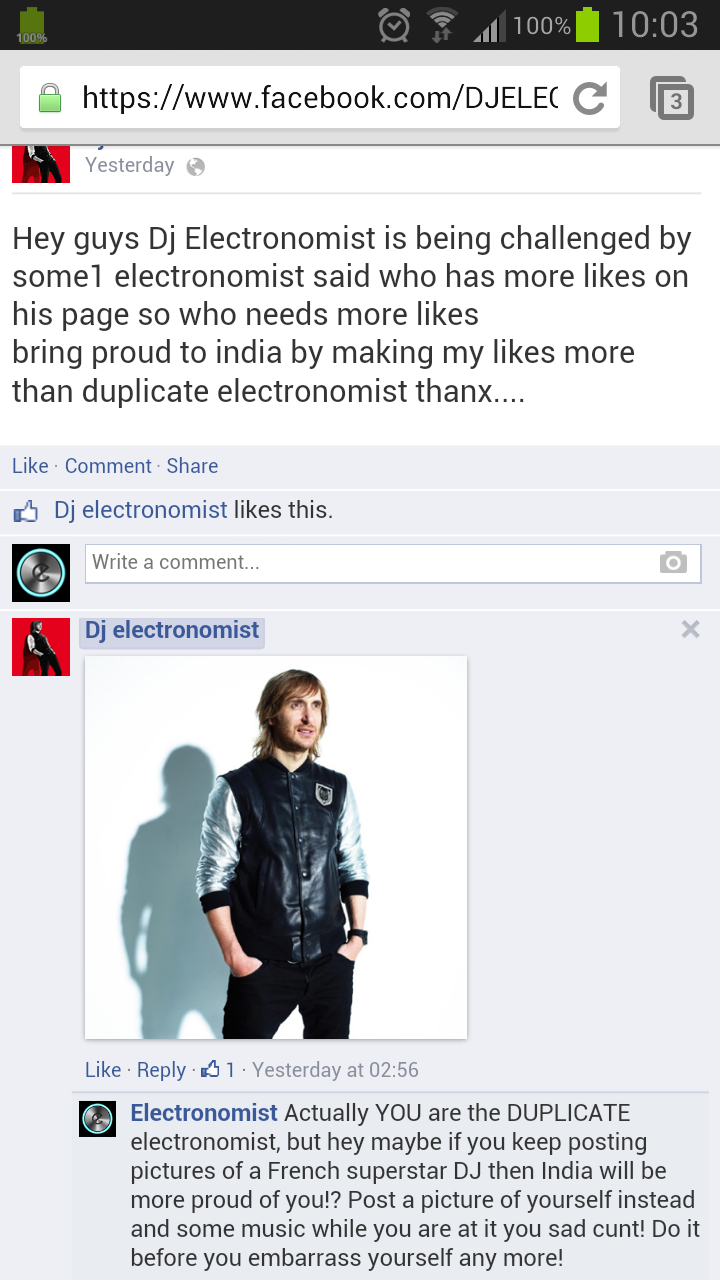 Right here is where he readily admits he is in this for the “likes”, and I show my anger a bit (again lol). 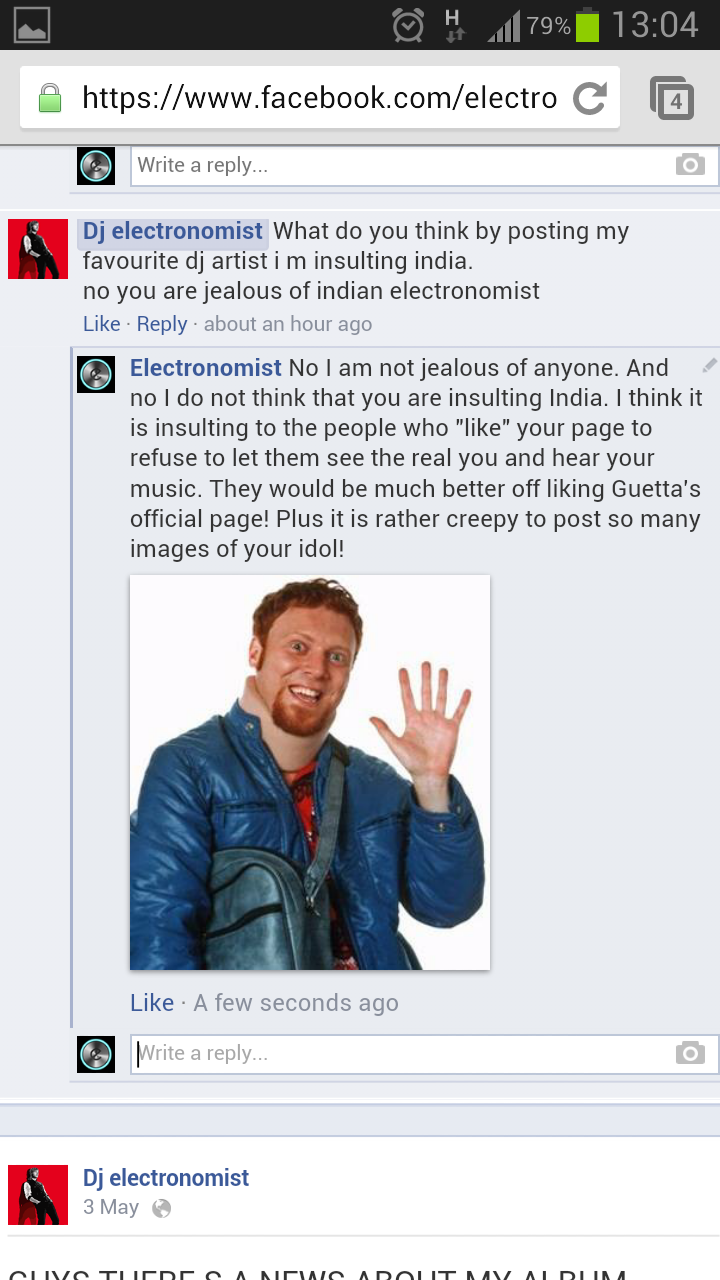 Accuses me of being jealous (which gave me a good giggle!). I throw in a little joke (image of Avid Merrion to highlight the creepy stalker-ish nature of his Guetta obsession)….
Which went completely over his head (understandable to be fair as the character is from a British TV show) 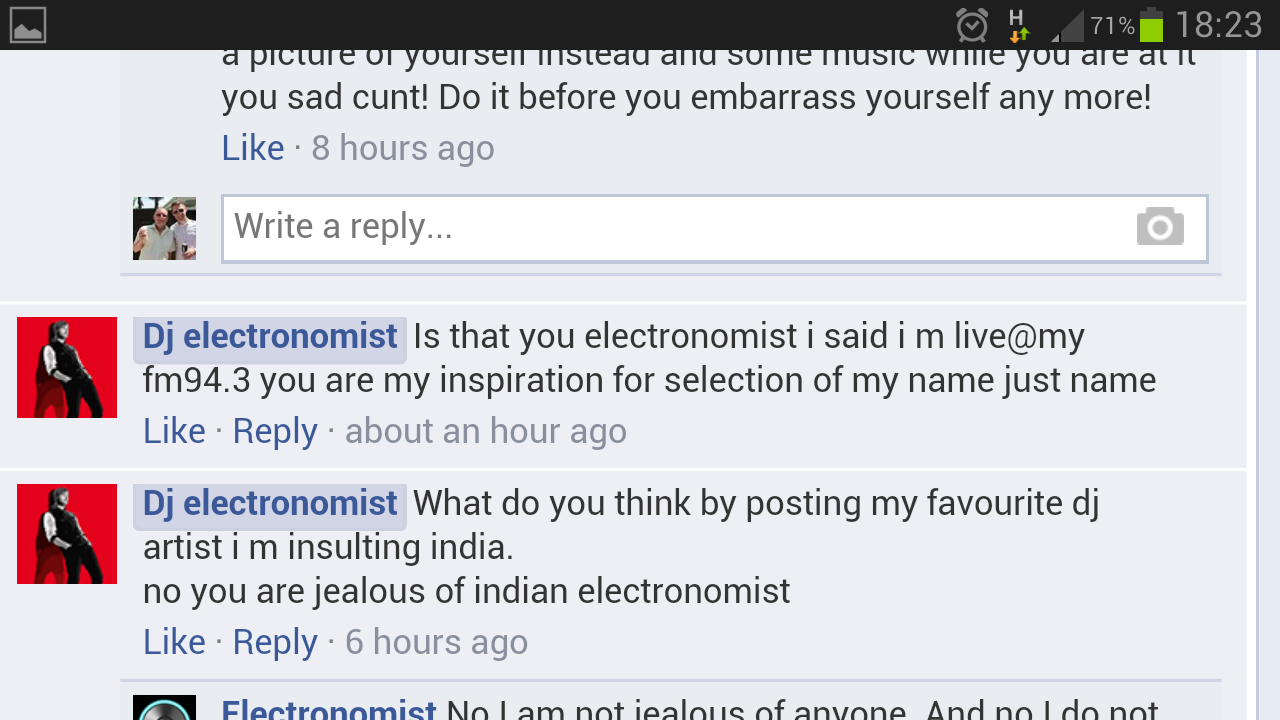 Admits I inspired his name (maybe me or the other feller, not the point though), and then says it’s just a name (wish I had trademarked it at times like this)!

I explain the image and make a little suggestion of a name change for him!

Thought we were reaching an understanding at this point… oh how wrong was I?!

Hate to break it to him but “I can’t get no satisfaction” over this farce! And no I will not assist someone who is capable of setting up a Facebook page in changing their name, surely that is not too hard for them?!

After this I chose to ignore it all, until… 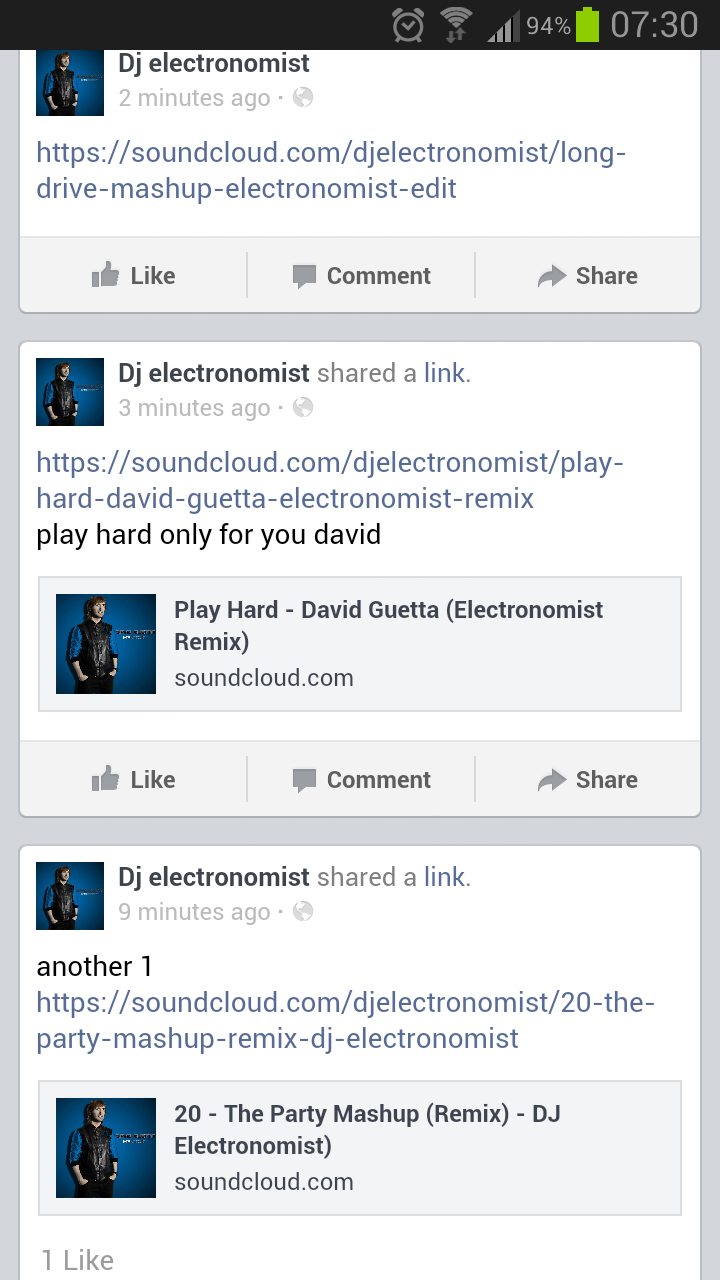 He really takes the piss by listing tunes as “electronomist remixes”. Time for me to knuckle down and create some more original Electronomist music and mixes (maybe a new radio show, as it’s been too long!) to show him how it’s really done!

As you can now see this person is clearly confused and deluded. The Internet can be a wonderful place, useful for information, connecting people, sharing art and music with your followers and fans, making the world a better place. But it also has its problems as we all know! This one is new to me. It made me wonder if similar has happened to other artists, particularly amateur artists who do not have a team of lawyers to sort their affairs out. I would like to hear from anyone who has suffered the same issues and how they handled it.